Robotic Farming: The Future Is Here

Robotic Farming: The Future Is Here

Robotic farming is here and it’s showing up in small pockets of the world. In the not-too-distant future, our fields could all be tilled, sown, tended and harvested entirely by fleets of co-operating autonomous machines by land and air.  They will be working both day and night.

Driverless tractors that follow pre-programmed routes are already being deployed at large farms around the globe. Drones are buzzing over fields assessing crop health and soil conditions, while ground sensors are monitoring the amount of water and nutrients are in the soil, triggering irrigation and fertilizer applications.

The World Bank says that we will need to produce 50% more food by 2050 if the global population continues to rise at the current pace. Yet, one of the concerns is that the effects of climate change could see crop yields falling by more than a quarter. Autonomous tractors, ground-based sensors, flying drones and enclosed hydroponic farms could all help farmers produce more food at a lower cost. 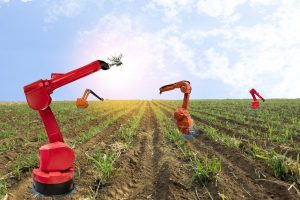 One report by US firm WinterGreen Research, forecasts that robotic farming will grow to an estimated $16.3B by 2020. Manufacturers including John Deere, CNH Industrial and AGCO are all fighting to corner the market in driverless tractors.

At UKA, our precision lenses are on the forefront of developing technology, and will keep pace with the ever-expanding manufacturing of robotic farming equipment.

In September of 2017, after a year of hard labor and careful planning, researchers did the impossible. On a farm in the county of Shropshire, England, the world’s first fully automated harvest – from barren land to crops – has been successfully completed. The ‘Hands Free Hectare’ used nothing but robots, and was yet another step forward in revolutionizing how the world is fed.

In 2016, the team from Harper Adams University set to work modifying a tractor and a twenty-five-year-old combine with cameras, lasers and GPS systems.  Drones aided in monitoring the field, while a robot ‘scout’ scooped up samples of soil for inspection.

Previously, studies on driverless tractors have used large machines to get the job done. The team at Harper Adams used a different approach: Their small tractor and combine was able to make more precise movements which limited damage to soil for future harvests, and increased efficiency.

Around the world, robotic farming is already in use. In France, Wall-Ye is a grape-picking robot that has been used in Burgundy’s wine region for years. In Japan, Kyoto-based robo lettuce farm hopes to produce 30,000 heads of lettuce a day, and decrease the energy costs by one third. Drones are also changing the way farmers monitor their crops.

The rise of robotic farming is not putting people out of jobs, instead it is changing the job they do.  The tractor driver won’t be physically in the tractor, instead they will be a fleet manager and agricultural analyst monitoring the development of their crops.