The global population is steadily increasing and it currently stands at 7.7 billion people. One question that needs to be answered is, “What are all these folks going to eat?” This question is clearly directed at the farming sector.

The global demand for agricultural products seems to be increasing at an unprecedented rate. Despite the rising population, labor shortages have become a major bottleneck for agricultural production today. The reasons for this include an aging farmer population and rapid urbanization. On top of that, harvesting high-value crops such as apples, tomatoes, and broccoli is often physically taxing, time-consuming and expensive. This is where harvesting robots come in.

There is a strong need for increased automation and robotization in the farming industry to meet growing demands and compensate for labor shortages. In addition to the labor and cost savings, there are even more advantages to turning to harvest robots. Whereas humans have varying operational quality, harvesting robots can work consistently with no individual or temporal differences. On top of that, harvesting robots can also inspect the crop to detect diseases and monitor crop development, allowing for more efficient farm management and optimizing the food-production chain.

Robots for Harvest
Harvesting can be a very difficult task for robots since they must be gentle enough not to damage fruits and veggies. That being said, harvesting robots already exist and are highly effective at their jobs.

T&G Global (formerly Turners and Growers) of New Zealand has been working in collaboration with robotics researchers at Abundant Robotics in California on robots that could revolutionize the face of fruit harvesting. In a few years, the robot will pick fruits alongside human laborers during harvest.

The “world’s first commercial robotic apple harvesting system”, as they call it, has successfully harvested apples as test results are pretty “fruitful.” The robotic system detects ripe apples using soft-touch robotics and the Light Detection and Ranging (Lidar) remote sensing technology, which leaves out unripe fruits during the harvesting process. The idea behind this apple harvesting robot has not been to replace human pickers on the farm but rather to enable 24-hour picking. 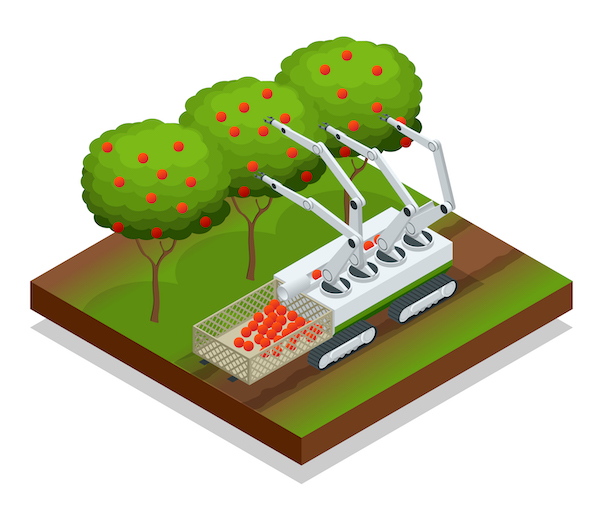 Growers are protecting their fruit during autonomous harvests in various ways, including innovations in so-called “soft” harvesting, in which machines are outfitted with soft suction cups or cushioned grabbers. Abundant Robotics developed the first vacuum harvester in 2016, which leverages computer vision to identify apples and sucks them through a soft hose at a rate of one apple per second.

Vision Robotics Corporation (VRC), a San Diego company, has also created a uniquely robust harvesting system that involves a pair of autonomous robotic solutions that work as a team. One robot functions as an eagle-eyed scout, mapping the farm area using vision-based mapping while collecting data such as the location and size of each orange. The second robot is more like a metallic octopus with a gentle touch. It is designed to harvest oranges with its unique eight arms, directed by the first robot’s 3D map to search and pick only ripe oranges. In a few years, legions of these robots might be doing the laborious and time-consuming task of picking fruit.

Computer Vision Quality Control
Harvest Quality Vision (HQV), a Croptracker computer vision system, is an exclusive technology that allows growers to scan a bin of apples, avocados, beets, lemons, kiwis, peaches, mangoes, pears, oranges, and tomatoes with a camera attachment, creating a 3D model of the scanned fruit. HQV analyzes the samples based on these scans to determine the size, color profile, and quantity of the fruits scanned in a matter of seconds. By sizing harvested fruit right in the bin, HQV can replace traditional pre-sorting, reducing handling and transit that can damage the fruit.

These harvesting robots are still in development, but their potential for alleviating labor shortages is enormous. So far, the price of many of these robots is prohibitively high for small farm operations. However, in the foreseeable future, we will see a lot more harvesting robots on large orchards.

The orchard robots mentioned above use advanced technologies to pick fruit gently, yet orchard robots have actually been around for a long time. Tuthill Temperley, a British company, has been manufacturing apple harvesting robots since 1969. Because these robots are designed to harvest cider apples, there is no need to be delicate with the apples. Tuthill manufactures various harvesters, one of which shakes the tree and catches falling apples, while another sweeps the apples off the ground between the rows of trees.

Conclusion
Innovation is vital in any industry, but it is more important than ever in agriculture. Embracing automation will be a critical factor in the changing landscape of agriculture around the world. It will also change the concept of farmworkers, reducing workload while demonstrating promising results in crop efficiency, higher yields, and reduced input costs.

Farmers will benefit from the latest Internet of Things (IoT) advancements in harvesting and the ability to deal with a wide spectrum of other challenges.

Universe Kogaku has an incredibly talented engineering team that can design and manufacture optical lenses for a wide range of agricultural applications. If you need premium custom lenses for your harvesting robots, please call 1-516-624-2444 or email info@universeoptics.com. One of our trained lens application engineers will get back to you as soon as possible.