The Federal Government Is Investing In VR

The Federal Government Is Investing In VR

When it comes to National Defense, the United States government is always looking for ways to give its soldiers an edge. Recently, that has meant investing in virtual reality, or VR.

The military has been using VR simulations for training purposes since the 1990s.

However, technology has advanced since then. These days virtual reality is used within all military branches in various ways, both on and off the battlefield.

Most notably, soldiers can use lenses for virtual reality glasses to plan missions, rehearse maneuvers, and even call in airstrikes if needed.

In the military, training is everything. War and defending America is dangerous business! So, the government must ensure its soldiers are as prepared as possible before deployment. 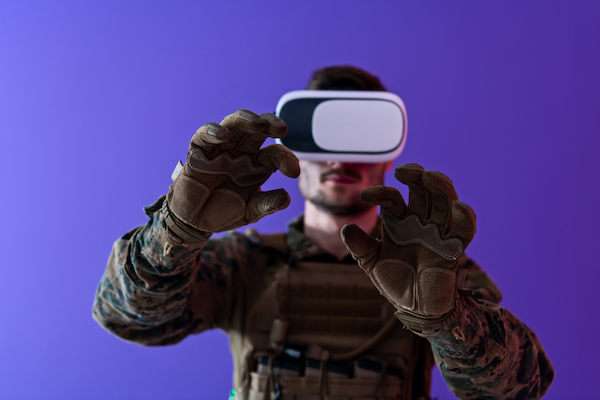 That’s where VR comes in. The military can use VR to create simulations of battle environments. This way, soldiers can get a feel for what they’re up against and how to react in various situations – without actually putting themselves in harm’s way.

With VR, soldiers can train in various environments, from the desert to urban settings.

This type of training is not only realistic, but it’s cost-effective. The government can save money by not having to fly or house troops worldwide for training, pay for live ammunition, or put anyone at unnecessary risk during training.

Not only is VR useful for training, but it’s helpful for mission planning and rehearsal.

For example, the Army uses a program called JRAC-Virtual to plan missions in a 3D virtual environment. This program allows commanders to “walk” through a task before it happens to get a lay of the land and adjust the mission as needed.

In addition, the Army uses VR to rehearse maneuvers. This rehearsal or dry run is beneficial for complicated missions that involve multiple units. By rehearsing in VR, commanders can ensure everyone is on the same page and knows what they need to do.

By doing dry runs in virtual reality settings, the military can avoid costly mistakes and better protect its soldiers. Any modifications can get made before anyone steps foot into enemy territory. As you might imagine, this move can help avert much loss of US soldiers’ life and limb.

Call in Air Strikes with VR

Another way the military is using VR is to call in airstrikes.

In the past, the military did this with 2D maps and a lot of guesswork. But now, the Army uses a program called VBS2 to plan airstrikes in a 3D virtual environment. Using three-dimensional virtual environments is better for accurate targeting and, ultimately, fewer civilian casualties.

In areas where ground-fighting occurs, military personnel can use this VR system to call in artillery strikes for additional backup.

The Government Is An Early Adopter

The United States Government and the military have long been early adopters of new technologies, and virtual reality is no exception. The federal government invests in VR to help soldiers train for combat and other situations.

The advantages of VR are numerous, and the technology will only continue to improve. VR is a powerful tool for the military that can help save lives. It provides a realistic and immersive experience that can help soldiers prepare for the rigors of combat. In addition, military leaders can use VR to train the soldiers for dangerous situations, such as IED explosions, without putting them in harm’s way.

But the government doesn’t reserve the use of this technology for just field soldiers. Other military areas they’re investing in VR include medical training and treatment.

When a medical emergency arises, field meds and doctors need to be able to think quickly and make decisions under pressure. VR can provide medical professionals with valuable training for emergencies. By training for these emergencies before they happen, they can make mistakes and learn from them in a safe environment before someone’s life is on the line.

In addition, VR is being used to treat soldiers who have PTSD. By immersing them in a virtual environment, they can face their fears and learn to cope with them in a safe setting.

The use of VR doesn’t stop there. The government uses it for architectural design, city planning, and disaster relief training. The FBI is even using it to catch criminals.

While it’s still early days for VR, the potential applications for military, local, state and federal use are endless. The government is investing in VR because it sees the potential for this technology to save lives, resources, money, and time.

Designers and manufacturers rely on Universe Kogaku to provide custom lenses for use in virtual reality systems.