Cutting through metal generally requires the use of crystals for amplification or focus but a new company in Wilmington, MA called TeraDiode has developed the first metal-cutting machine that uses only laser diodes. The new machine is known as Terablade.  It is estimated to be 40% more efficient and less expensive than other industrial lasers but is just as powerful making this product an important tool for engineers in manufacturing settings. 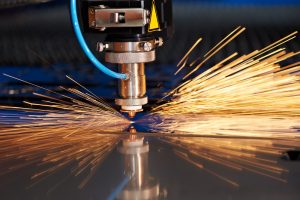 Diode lasers produced low-quality laser beams or poor focus in the past and were not powerful enough for industrial use. Developed decades ago, carbon dioxide lasers are bright but they are large and inefficient. The next set of lasers, diode-pumped solid-state lasers, use an amplifying crystal, before converting it into a laser beam and are about 30% efficient.

The TeraBlade changed all that. Using a technique called wavelength beam combining, it combines several laser beams from diodes into one powerful beam.  Light from the diode laser lens passes through the transform lens. The beam then, rather than being dispersed on a diffraction grate, is actually forced in the same direction to create one beam.

Our team of design engineers are available to find solutions to all laser lens applications whether for military and defense systems, CD and DVD players, laser pointers, laser levels, laser surface inspection systems and positioning and measuring equipment.