In the United States the unemployment rate is at its lowest in nearly fifty years. As a result, the need to automate bin picking is urgent. In the U.S., where 38% of the manufacturing labor force moves parts between bins and manufacturing machines, 500,000 jobs remain unfilled.

It’s been said that bin picking is the ‘holy grail’ of robotic automation, and it shows within the automation circles.  Every trade show that caters to manufacturing and automation has new companies that claim to have finally solved the puzzle. Bin picking with 3D robots is taking off across the country with new ideas at a growing rate, as it’s filling a niche within the industry. 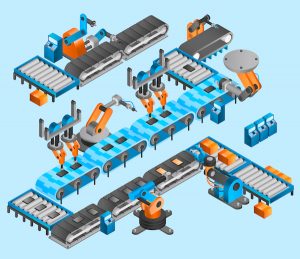 “Many manufacturers need to accommodate castings, machining processes, components with varying shapes and sizes, automotive components that come from many different suppliers, and heavy industrial parts. This makes it very difficult to place parts in trays or other orderly arrangements that can simplify pick-and-place operations,” says Ben Sagan, business development manager for robotics at Mitsubishi Electric.

Logistic companies like Amazon, deal with similar situations as they package different products of various shapes and sizes for the consumer.

The multiple parts in these processes are often located in bins with little order in orientation. This requires flexible robotic systems that can adapt to the great variety in product shape, size, and position. Combining 3D vision with robotic technology can be the most cost-effective solution to this problem.

The complete process of bin picking consists of three successive steps. Once the part has been determined by the robot, each of the next three steps is performed:

These systems typically consist of multiple cameras mounted at different locations or one or more laser placement sensors to triangulate the position of the object. The cameras view the line from different angles. The deviation of the line represents shape variations. Multiple scans are assembled into a data point cloud, enabling the robot to learn part shapes and orientation from different data points in space.

Even though Bin picking with 3D robots is still in its infancy in terms of adoption, most experts anticipate rapid growth. At Universe Optics we offer a large variety of precision lenses that can be adapted to fit into your particular robot. If you require a lens with different specifications, we will work with your design team to ensure our lens meets your needs.